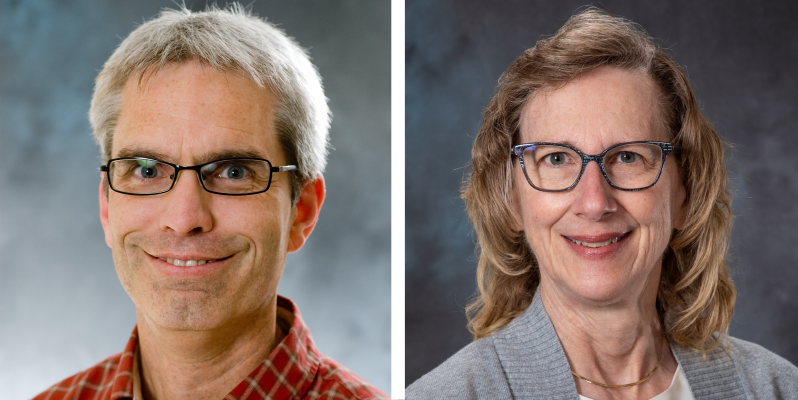 Dr. Derek Brower of Orange City and Sandy Van Kley of Sioux Center are the recipients of Northwestern College’s 2021 Inspirational Service Awards. Brower was chosen as the faculty recipient, while Van Kley received the staff award during the college’s Celebration Banquet on May 3.

The awards recognize employees who go beyond excellence in their performance, have demonstrated a selfless commitment to service, and whose dedication to Christ is apparent in their daily work and interactions. A selection committee chose the winners from among candidates nominated by employees.

Brower, associate professor of education and co-chair of the education department, has taught at Northwestern since 2006. A 1989 Northwestern College alumnus, he also earned a second bachelor’s degree and a master’s in technology education from Western Washington University, as well as a doctorate in education from Montana State University.

“He is outstanding at engaging and equipping students in the classroom,” wrote Dr. Jeff VanDerWerff, dean of social sciences, in a letter of nomination. “He also offers insight and perspective to a large group of advisees.

“As department chair, he serves very effectively. This is a challenging role with a considerable number of responsibilities, as he not only leads a large department with a number of full-time colleagues but also manages several adjunct instructors. Moreover, he contributes in important ways to making sure that the undergraduate and graduate programs in education work together in a collaborative fashion,” says VanDerWerff.

Brower brings a global perspective and extensive classroom experience to his position on the education faculty, having taught secondary science for 12 years at schools in Iowa, Botswana, the Marshall Islands and Thailand. He also represents the education department and Northwestern to a broad network of educational leaders across the state of Iowa.

VanDerWerff describes Brower as unflappable. “He carries out his duties with considerable cheer and never seems too hurried or rushed as he chats up a faculty colleague, student or staff member,” he says.

“Her style is firm and gracious—committed to safeguarding Northwestern’s policies and at the same time recognizing that polices exist to ensure our students receive a great education, and making that outcome her primary goal,” says Dr. Nathan Phinney, vice president for academic affairs. “Sandy’s fundamental disposition is to be helpful, not just authoritative. She sees herself as a servant of the college and of both students and faculty within it.”

“She is a leader, not a manager,” says Dr. Jen Schon, associate director of institutional research. “She doesn’t tell her staff what to do and leave them to do it. She’s in the trenches with them, handling issues in a fair and compassionate manner, completing excess workload, and ensuring an effectively run office.”

Janette Reuter, comptroller, describes Van Kley as an outstanding role model. “Sandy always finds time for a colleague or student, even when it interrupts her plans. She is a great listener and collaborates well with others.”

Dr. Mike Wallinga, director of institutional research, says he always looks forward to working with Van Kley. “She possesses a cooperative spirit and always strives toward the best solution for the institution. Even when the work is difficult or trying, she continually displays a positive attitude and a refusal to be discouraged,” he says.


Northwestern offers bachelor's degrees in elementary and secondary education as well as an online Master of Education degree. Our program emphasizes extensive classroom experience, a "Teacher as Servant" philosophy, and performance-based outcomes, ensuring you have every opportunity to become an effective teacher.