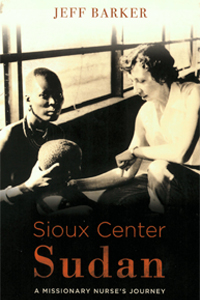 Northwestern College theatre professor Jeff Barker has recently published a book, “Sioux Center Sudan: A Missionary Nurse’s Journey,” about Sioux Center native Arlene Schuiteman. It is available on bookseller websites such as Amazon.com and Christianbook.com as well as on the publisher’s website, Hendrickson.com.

Barker and Schuiteman met in 2005 as Barker was gathering information about another missionary who had been a pioneer among female missionary pilots. He learned that a woman from Sioux Center knew the Missionary Aviation Fellowship co-founder. Barker contacted Schuiteman and after two meetings during which she described her friend and their adventures as agents of the gospel in Africa, Barker decided to write about Schuiteman.

He wrote a play, “Sioux Center Sudan,” about her first assignment in Africa, and then two more plays about her years spent serving in Ethiopia and Zambia. When she turned 90 years old, Schuiteman gave Barker access to her journals, in which she’d recorded, nearly daily, the events, relationships, and spiritual questions and insights she experienced during her 33-year career as a missionary nurse.

The journals—and Barker’s and Schuiteman’s shared passion for God’s dramatic stories—enabled him to expand his first play into a biography about Schuiteman’s experiences in Nasir, South Sudan, from 1955 until she was expelled by the Muslim government in 1963.

Barker is also the author of “The Storytelling Church” in addition to numerous plays, including “Kin: The Trial of Carrie Buck,” about civil rights, and “Unspoken for Time,” about sexual assault. He is chair of Northwestern’s theatre department and directs the college’s touring theatre company.