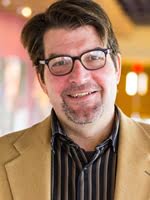 Before coming to Northwestern, Dr. Hubbard worked extensively in both academic and professional theatre as a director, actor, teaching artist and playwright/adaptor. Among the shows he’s directed are an award-winning production of The Comedy of Errors and an original stage adaptation of Larry Woiwode’s novel Beyond the Bedroom Wall. Hubbard debuted his original, one-person show, Dancing with Jimmy, at the Association for Theatre in Higher Education conference in New York City in August 2003 and has since performed it in a number of venues. In 2005 he received a fellowship to participate in the O’Neill Critics Institute at the Eugene O’Neill Theatre Center. He also publishes articles and reviews in numerous academic books and journals.