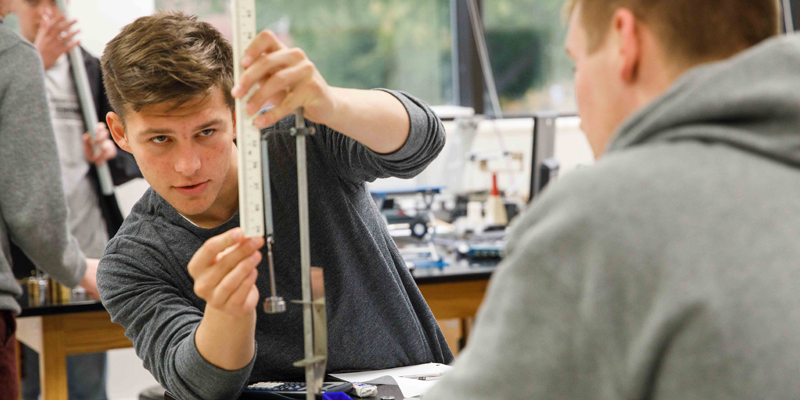 Northwestern College will add biophysics and physics education to the majors it offers its students, effective this fall.

The interdisciplinary biophysics major will introduce students to a field in which physics and mathematics are used to describe the mechanisms of biological processes. Dr. Emily Grace, assistant professor of physics, designed the program after seeing that many Northwestern students with an interest or natural ability in physics were pre-med majors.

“A biophysics major wouldn’t be possible if we didn’t already have incredible science programs in place,” she says, noting that predicted job growth for the field through 2024 ranges from a low of 6% to as high as 19%.

Grace followed program recommendations of the Biophysical Society of America and patterned the major after one at Duke University, which also offers biophysics as a Bachelor of Arts degree. Graduates interested in earning a master’s degree or doctorate will have a variety of options—including biomedical physics, computational biology and biomedical engineering—depending on whether they focus on biology, chemistry, math or computer science courses for their undergraduate electives. Biomedical engineering is a program of study available through Northwestern’s dual-degree partnership with Washington University in St. Louis.

Students who pursue biophysics at Northwestern will study with Grace, an astroparticle physicist who has a doctorate in physics from Royal Holloway University of London. In addition, she and Dr. Dave Arnett, a Northwestern chemistry professor, are collaborating on biophysics research that uses fluorescence correlation spectroscopy.

The other new major, physics education, will equip students to become excellent secondary school physics teachers, a well-paying job in high demand. Both nationally and in Iowa, physics teachers are in the top 10 in terms of need.

“I honestly believe the most valuable job is a high school physics teacher, because they determine the future of the field,” Grace says.

Physics education majors at Northwestern will be given the opportunity to conduct original physics education research with Grace, who also has a master’s degree in science education. And for those students who plan to teach in rural areas and therefore won’t be specializing only in physics, the major is designed so they can easily pick up a second endorsement in math, chemistry or basic science.


Northwestern’s physics program will enable you to study the blueprints of creation and its underlying principles of order and design. Earning a degree in physics will make you a sought-after teacher or research scientist.


The diverse courses of Northwestern’s math department will teach you both analytical and creative problem-solving skills. Northwestern math faculty all hold doctorates and have a variety of specializations. Studying with them will set you up for success in a variety of mathematical fields. Northwestern grads excel on the actuarial science exams and are in high demand by employers.