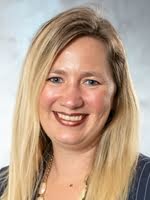 After graduating from college with a psychology degree and excelling in a sales career, Emily Grace returned to school to pursue her first love: physics. She earned a master's degree in education and a second undergraduate degree in physics, then earned a doctorate in physics from the prestigious Royal Holloway University of London. While in the United Kingdom, she won a national contest when she wrote and performed a rap to explain her research on dark matter and liquid argon.

Dr. Grace has been a member of the PICO, MiniCLEAN, DEAP-3600, LZ, and LUX dark matter collaborations. She was a postdoctoral scholar at Pennsylvania State University and a research assistant at Royal Holloway University of London, the University of Nebraska and Indiana University, as well as a visiting lecturer at Royal Holloway. Prior to joining Northwestern's faculty, she was an assistant professor at Sterling College in Kansas.

Though all students are welcome in this IGE physics course, this is the first in a two course algebra-based sequence designed particularly for life science majors and others intending to apply to medical or graduate school. The course includes the following topics: kinematics, Newtonian mechanics, energy, momentum, gravity, thermodynamics, and oscillations. Prerequisite: C- or higher in MAT 109QR, ACT math score of 24 or better (SAT 570 or above), or consent of the department chair. (4 credits) (NWCore option under Science and the Natural World) Note: There is a laboratory component to this course.

A continuation of General Physics I. Topics will include simple harmonic oscillation, mechanical and electromagnetic waves, electromagnetism and modern physics.Prerequisite: successful completion of PHY111 with a grade of C- or better, or consent of department chair.(4 credits)

This course covers several topics in the field of astronomy including our solar system, astronomical observations and measurements, and a basic Introduction to cosmology and relativity. Prerequisites: C- or higher in MAT109QR or MAT127, ACT math score of 22 (SAT520) or above, or permission of instructor. (3 credits; alternate years, consult department) Note: There is no laboratory component to this course, and it does not count as an option under Science and the Natural World. However, the course does count toward the Elementary and Secondary Endorsements in Basic Science.

(4 credits)(NWCore option under Science and the Natural World) Though all students are welcome in this calculus-based, IGE physics course, this is the first of a two course sequence designed for math, science, and engineering majors and others who have taken or are taking calculus and intend to apply to medical or graduate school. This course includes the following topics: kinematics, Newtonian mechanics, energy, momentum, gravity, oscillations, and thermodynamics. Prerequisite: C- or higher in MAT 112, or consent of the department chair.

A continuation of Classical Physics I. Topics will include simple harmonic oscillation, mechanical and electromagnetic waves, and electromagnetism.Prerequisite: successful completion of PHY211 with a grade of C- or better.(4 credits)

For students seeking a minor in physics or those interested in obtaining a physics teaching endorsement. Topics will include special relativity, quantized energy and momentum, Schrodinger's Equation, nuclear and particle physics, and cosmology.Prerequisites: successful completion of PHY212 with a grade of C- or higher, or permission of instructor.(4 credits, alternate years, consult department)

"Among Diversity Challenges, Science Textbooks Are Part of the Problem", Reformed Journal, Nov 2019

“Incorporating Theology and Science Philosophy into the Physics Classroom”, International Journal of Christianity and Education, April 2018

“Index of refraction, Rayleigh scattering, and Sellmeier coefficients in solid and liquid argon and xenon”, Nuclear Instruments and Methods in Physics, June 2017

“Constraints on Low-Mass WIMP Interaction on 19F from PICASSO”, Physics Letters B February 2013