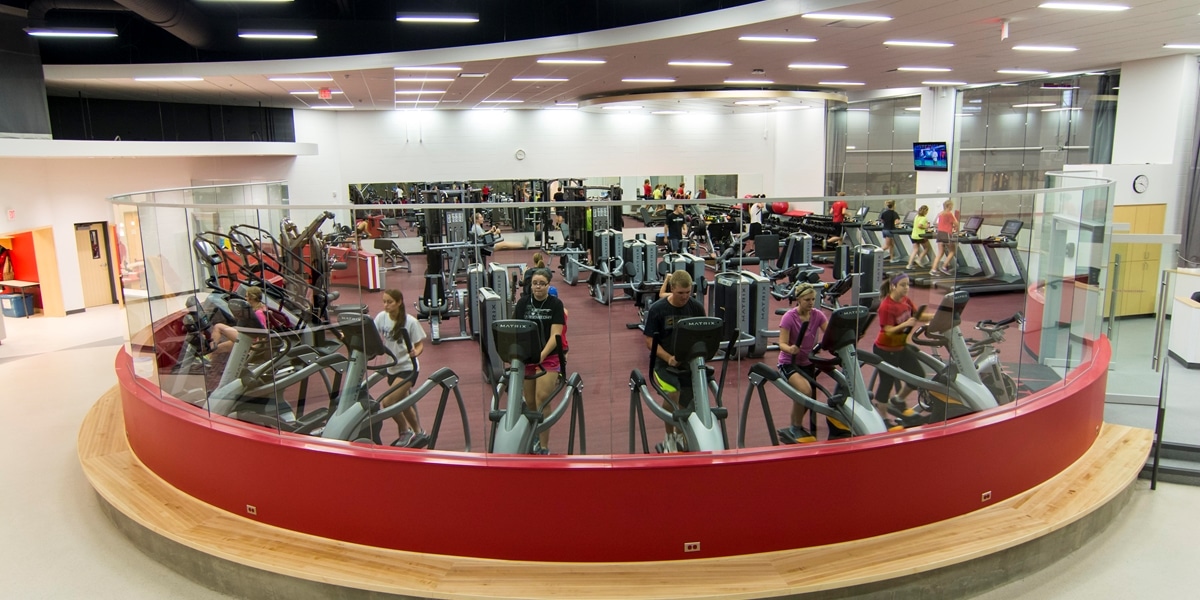 Northwestern students and members of the community are enjoying the results of a remodeling project that transformed what traditionally was referred to as the RSC Mini-Gym into a state-of-the-art fitness center.

The $2.2 million project equipped the center with Matrix cardio and resistance machines, free weights and other fitness gear. Gone are the white cement block walls and two-story-high ceiling. In its place is a floor plan that is both open and intimate, featuring curved half-walls topped with glass and cloud ceiling features in a variety of heights.

A game room area with pool, ping pong and foosball is part of the fitness center, as are three new racquetball courts. The entrance and existing locker rooms were remodeled and two new restrooms were added. New lighting and electrical systems were installed, and the mechanical system that provides heat and hot water for both the Rowenhorst Student Center and the Bultman Center was replaced.

“There are so many more options,” says Deidra Vander Woude, a sophomore from Chandler, Minn. “I can do a lot more, and because we have TVs and my iPod can hook up to it, I’m more motivated to exercise.”

“It’s been exciting to see the use of the area by our students, faculty and staff,” says Dr. Earl Woudstra, professor of kinesiology and chair of the planning committee. “What’s especially encouraging is to see the use by our general student population—those who aren’t part of any athletic team. We’ve also heard very positive comments about the facility from prospective students and their parents.”

Woudstra says the center is having a significant impact on the college’s academic programs as well, with classes making use of the fitness equipment and racquetball courts. Students enrolled in a practicum as part of a career concentration in strength and conditioning are currently serving as personal trainers under the direction of Kyle Ochsner, Northwestern’s certified strength and conditioning coach.

The design of the new fitness center provides a natural transition from the Rowenhorst Student Center, which was remodeled in 2007, to the four-court area of the DeWitt Fitness Center, renovated in 2011. Work on the former Mini-Gym began in June and was completed by Oct. 16.

Architect for the remodeling project was Cannon Moss Brygger Architects of Sioux City. The general contractor was Hoogendoorn Construction of Canton, S.D.