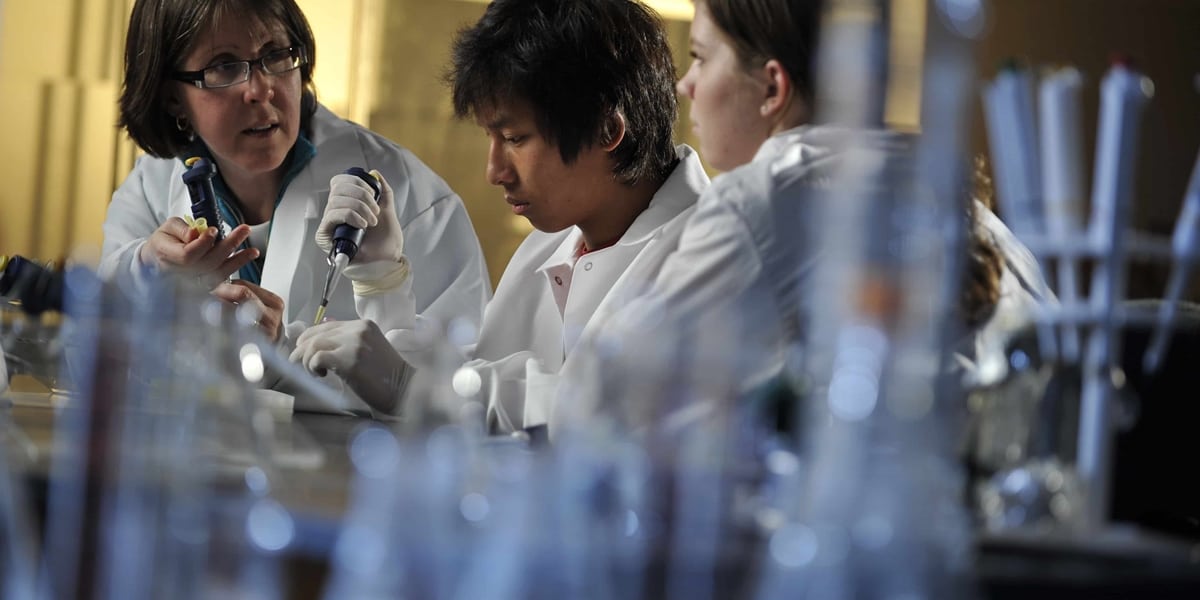 Dr. Sara Sybesma Tolsma, professor of biology at Northwestern College, has been named this year’s recipient of the Northwestern Teaching Excellence Award. She was honored during the college’s commencement ceremony on May 9.

Sponsored by the Alumni Association, the award is administered by a selection committee made up of members of the Student Government Association and the Sigma Tau senior honor society, along with past award winners and a representative of the Faculty Development Committee. About 135 nominations were received for 40 different faculty members. The committee chose Dr. Chris Hausmann, assistant professor of sociology; Ann Minnick, associate professor of communications; and Jonathan Sabo, professor of theatre and speech, as finalists along with Tolsma.

A member of Northwestern’s faculty since 1995, Tolsma is described as an energetic professor who has a passion for the subject matter and for her students.

“Dr. Tolsma was an outstanding teacher,” wrote one student in a letter of nomination. “She always presented information in a way that was easy to understand. She required a lot of you, but you knew what to expect on all tests and projects. She was tough but fair and pushed you to do your best.”

Other students said Tolsma makes her classroom comfortable, encourages questions and takes extra time to explain the material if necessary.

“Dr. Tolsma makes learning a blast and is one of the most caring, honest people I know,” wrote another nominator. “I have learned more from her about life and biology because of her excellent teaching than I have from anyone else.”

A Northwestern College alumna who earned a doctorate in microbiology/immunology/virology from Northwestern University, Tolsma is known for preparing meaningful lab experiments. “Her labs are really fun,” wrote one student. “She plans them so we find really interesting results that have real-world applications and give us skills for future lab work.”

Students also said Tolsma cares deeply about them and is a strong mentor as a woman, scientist and Christian.

“I enjoy how often she opens her home to students; it makes me feel like I have a local ‘mom,” wrote a student.

Tolsma’s research efforts in cancer genetics and cell biology have been widely published in scientific journals and have received a number of awards. She has been a part of several symposia on bioethical issues surrounding genetic technologies. Her current laboratory research extends her interest in genetics to populations in a study of mayfly genetic variation in northwest Iowa watersheds.