Eight will receive grants of up to $2,250 for their projects; the other three will be given up to $5,000 for collaborative research with students. The money is designed to encourage the production of scholarly work for publication and distribution beyond Northwestern’s campus. 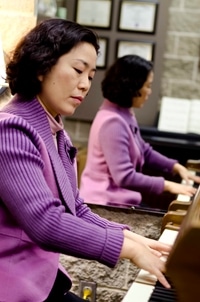 Among the 11 faculty receiving Northwestern College Scholarship Grants is Dr. Juyeon Kang, who will study and perform the work of Viennese and Czech composers.

Chemistry professor Dr. Dave Arnett will continue his research with colleagues at the University of Kansas and the University of Missouri-Kansas City. Their experiments are using fluorescent measurement to better understand how a signaling protein activates an enzyme involved in the dilation of blood vessels.

Dr. Frank Bentrem, who teaches physics at Northwestern, is working on developing computer software to simulate the attachment of polymer molecules to graphene, a one-atom thick sheet of pure carbon. When attached, such molecules change the electrical properties of graphene, giving it the potential for numerous applications—including that of a highly sensitive chemical or biochemical detector.

Education professor Dr. Laurie Daily will attend the three-week Education in Ireland Seminar in Galway, Ireland, as part of her research into that country’s policy and practices related to students with disabilities. She hopes to present her findings at next year’s annual conference of the International Association of Special Educators.

Pianist and music professor Dr. Juyeon Kang will study the scores, prepare and present the work of Viennese and Czech composers Dussek, Hummel, Brahms and Janacek. Performances are planned for the U.S. Embassies in Vienna and Bratislava, as well as throughout the United States and abroad during the 2012–13 school year.

Dr. Michael Kensak, English, will resume work on a book about poet Geoffrey Chaucer and medieval theories of matter. He plans to submit an article based on his research for publication in the peer-reviewed journal Studies in the Age of Chaucer.

History professor Dr. Michael Kugler will continue his research of biblical scholarship in 17th-century Britain, examining how early-modern scholars portrayed the historical Jesus Christ. An essay summarizing his findings could be presented in October at a conference on European history.

English professor Dr. Ann Lundberg will expand her study of the 1874 geological survey of the Black Hills, comparing the scientific narratives of the region’s history with Native American origin stories. She hopes to publish her work in a literary or historical journal.

Dr. Lila Sybesma, education, plans to write a historical fiction account of the sinking of the Sultana, a steamboat paddle wheeler carrying former Union prisoners of war at the end of the Civil War. Her great-granduncle survived the worst maritime disaster in United States history, which claimed 1,700 lives. Sybesma’s research will include visiting Civil War museums and reenactments. In addition to publishing her book, she plans to give presentations about the Sultana Disaster in area schools.

Carlson will oversee Sarah Bartz, a political science major from Lakeville, Minn., as she conducts oral history interviews of Vietnam War veterans in northwest Iowa. Her work is a continuation of the Northwest Iowa Vietnam Veterans Oral History Project, which was launched in 2007 by students in Carlson’s America and the Vietnam War class. The interviews will be posted online by Northwestern’s Ramaker Library.

George will study the relationship between the Christian upbringing, beliefs and practices of Northwestern College business students and the students’ corporate social responsibility decisions. His goal is to better understand how faith impacts one’s work and vocation. Kayla Kleinjan, a business administration and psychology major from Avon, Minn., will provide data analysis.

Finally, three biology-health professions majors—Dan Locker from Orange City, Amy Van Skike from Ireton, Iowa, and Preston Leader from Crofton, Neb.—will work with Tolsma on her research into the genetic relationships between mayfly populations on Santa Cruz Island and the California mainland. Plans are to present their findings to the Iowa Academy of Science next spring.