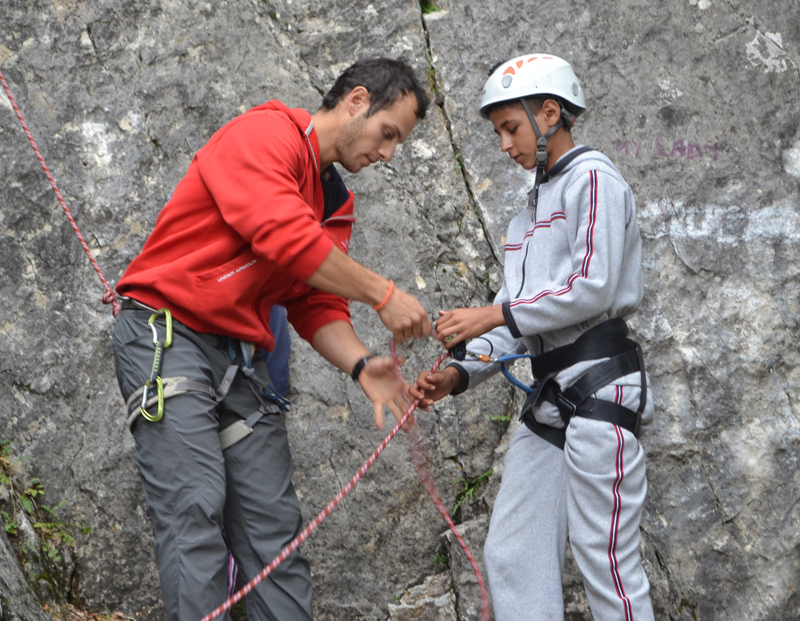 Felipe Silva, a 2012 graduate of Northwestern College who founded and directs a climbing gym as a way to reach out to at-risk children and teens in an economically depressed region of Romania, has been named the 2017 recipient of the Young Alumni Award from the Council for Christian Colleges & Universities (CCCU). The award will be presented during the CCCU’s presidents’ conference in Washington, D.C., Jan. 25–27.

The CCCU Young Alumni Award is given to individuals who have graduated within the last 10 years and have achieved uncommon leadership or success in a way that reflects the values of Christian higher education. Thousands of people cast their votes for the nominees in October on the organization’s Facebook page.

“What made me really excited about this award was how many people backed me up to vote for me,” says Silva, a native of Brazil who oversees Fara Limite Sala de Catarare (No Limit Climbing Gym) in Vulcan, Romania. “It was a full month of people encouraging me and speaking about our ministry. Working in a place where you are so far away from those you love and those who really believe in you is not easy, so when you get a lot of people encouraging what you are doing, that is a great honor and blessing. This award really got me more excited, motivated and encouraged about what we are doing here.”

Silva, who majored in religion, minored in sociology, played soccer and was an assistant resident director at Northwestern, credits his campus experience for greatly influencing his life and direction. “Everything came together with faith as the focus of my life. I got my vision for Christian community development and the tools to work where I am working today. It was not just the academic part of my education that made the biggest impact, but the great example I saw in many of the staff I encountered in my college years.”

“I am delighted that Felipe is being honored as the CCCU Young Alumni Award winner,” says Greg Christy, Northwestern’s president. “He and his wife, Janelle, are excellent examples of Northwestern’s mission to engage students in courageous and faithful learning and living that empowers them to follow Christ and pursue God’s redeeming work in the world. Their passion for the people of Romania is inspiring, and they are bringing honor to the Lord and to Northwestern College through their service.”

The Silvas are both staff members at New Horizons Foundation, which uses experiential education to help youth develop life skills through participation in clubs and camps, and partners with Northwestern to operate the college’s Romania Semester. When the couple arrived in Romania’s Jiu Valley in 2013, they realized children and teens needed a safe, healthy place to hang out.

“They didn’t have a safe space to go to and role models to share their faith with them,” says Felipe. “The Jiu Valley is an economically depressed coal-mining region, and most parents are unemployed or living off of pensions. There are very few healthy activities to do outside of school, and many students drop out early and resort to stealing or begging for money.”

Fara Limite Sala de Catarare opened in April 2015 and has 40 sponsored climbers whose fees are paid by donors. In exchange for the membership, the students agree to stay in school with passing grades, come to a weekly reading hour every Saturday, and climb at the gym at least twice a week. More than 200 youth have used the gym. Vulcan city officials have praised the staff for helping to stem the tide of school dropouts.

Silva says rock climbing helps develop problem-solving skills, persistence, leadership, discipline and courage—as well as trust, a characteristic sadly lacking in this country that’s still reeling from years of communistic influence. “They were taught not to trust people; others could be spies,” says Silva. “The basis of rock climbing is trust. You really have to trust the person you’re climbing with, yourself, the equipment and the environment. We’re teaching them you can trust people in certain situations.”

The Council for Christian Colleges & Universities seeks to advance the cause of Christ-centered higher education and to help its members and affiliates transform lives by faithfully relating scholarship and service to biblical truth. The 115 member campuses in North America are all regionally accredited, comprehensive colleges and universities with Christ-centered missions and curricula rooted in the arts and sciences. The CCCU also includes 63 affiliated campuses in 20 countries.