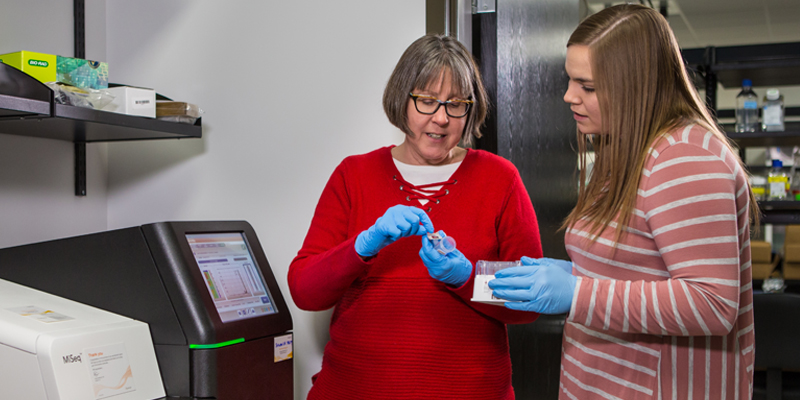 Dr. Sara Sybesma Tolsma, professor of biology at Northwestern College, has been named the 2021 recipient of the college’s Faculty Excellence in Faith and Learning Award. She was honored during commencement exercises on May 8.

The award honors and encourages the calling and responsibility of Christian faculty to devote time and energy to scholarship and creative expression in ways that faithfully express the wonder, truth and beauty of God’s revelation in Scripture and creation. Northwestern’s academic deans and vice president for academic affairs selected Tolsma as the recipient from among faculty nominated by their colleagues.

A 1984 Northwestern College alumna who earned a doctorate in microbiology, immunology and virology from Northwestern University, Tolsma has been teaching at her alma mater since 1995. Her research efforts in cancer genetics and cell biology have been widely published in scientific journals and have received numerous awards. She has also been instrumental in Northwestern becoming part of the SEA-PHAGES and SEA-GENES research programs, which involve students in a global effort to discover phages—viruses that infect bacteria—and previously unknown functions of genes.

Tolsma has published a number of essays in Perspectives: A Journal of Reformed Thought, which she co-edits, and she co-wrote a book about the importance of engaging young people in conversations about science and faith. “Read her section of the book, and it’s clear she is a biologist who takes both science and faith very seriously,” wrote one of the faculty members who nominated Tolsma for the award.

Another nomination described Tolsma as a productive researcher: “The combination of her technical, disciplinary work with her commitment to thinking Christianly about that work makes her an excellent candidate for this award.”

Tolsma says the privilege of studying what God created motivates her to do good science and is also a way she experiences intimacy with God. “When I make a discovery, I’m going to share it, but for a moment, I share it with God alone,” she says. “That’s an act of worship. I experience awe and wonder.”