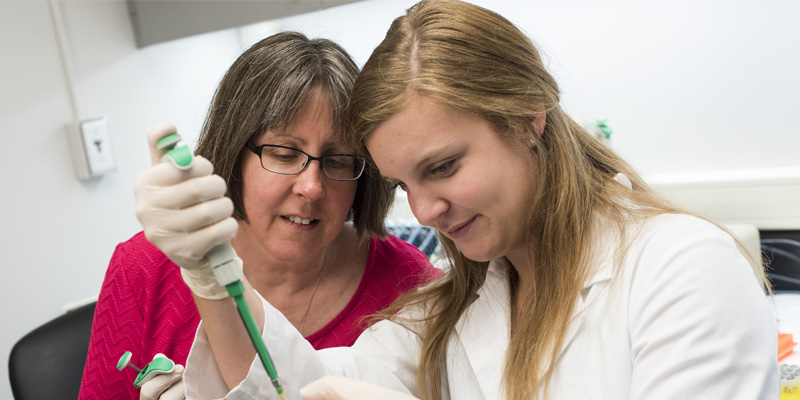 Part of that preparation was in a voluntary, non-credit Pre-MCAT course Heeg offered last year to test the AdaptPrep software she’s developing with Tim Huffman, professor of mathematics at Northwestern. Meeting every other week, science students learned about the exam and then did practice questions with the AdaptPrep MCAT software, to which they received free access. The software is currently on the market for the Chemical and Physical Foundations of Biological Systems and Critical Analysis and Reasoning Skills sections of the exam. It will be on the market for the Biological and Biochemical Foundations of Living Systems and Psychological, Social and Biological Foundations of Behavior sections this November.

“AdaptPrep is a software system that from an educational perspective works,” says Heeg. “It doesn’t negate the importance of class time but reinforces the relevance of what we’re doing in class.” Several Northwestern faculty members are among the software’s content contributors. Developers are continually growing the question bank and making adjustments to the program based on student data.

The MCAT is taken by 60,000 to 80,000 students each year. Developed and administered by the Association of American Medical Colleges, it was created to help medical school admissions offices assess candidates’ problem solving; critical thinking; and knowledge of natural, behavioral and social science concepts and principles.

Heeg says Northwestern’s liberal arts education plays an important role in students’ MCAT preparation. “In 2015 the MCAT added psychological and social science questions, so now half of the exam is on critical analysis, reasoning, psychology and sociology. At Northwestern, we have a strong core education, and students are introduced to critical analysis and reasoning skills in their First-Year Seminar, so we are priming them to succeed.”

Next year, Northwestern’s science students will take classes and conduct research in a new $24.5 million natural and health sciences building. The 61,000-square-foot eco-friendly facility will house classrooms, laboratories and faculty offices for the departments of biology, chemistry and nursing.