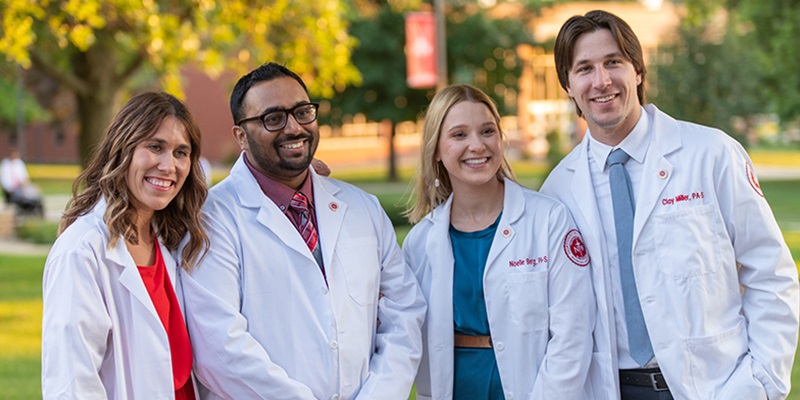 The first cohort of students in Northwestern College’s physician assistant studies program will graduate Thursday, Aug. 11. Master’s degrees will be awarded to 24 students during a 7 p.m. ceremony in Christ Chapel.

“This is a significant moment in Northwestern’s history,” says Dr. D. Nathan Phinney, vice president for academic affairs. “These graduates have been leaders in this new graduate program, and they have made us proud—setting a standard of excellence for the students who will follow them. We’re confident they will represent Northwestern well as they help meet our nation’s urgent need for health care workers.”

Northwestern’s 2022 physician assistant graduates hail from eight states ranging from Washington to Wisconsin and Texas to Minnesota. During their commencement, they’ll hear a student reflection from Hannah Myers, their class president, and listen to an address given by Marty Guthmiller, the CEO of Orange City Area Health System.

Guthmiller has been with the Orange City Area Health System since 1994. In his role as CEO, he led the health system through the process of becoming the first Critical Access Hospital in Iowa to relocate to a new facility. He also served on the board of the Iowa Hospital Association from 2012 to 2021, including two years as its chair.

A 1982 graduate of Northwestern College, Guthmiller earned a master’s degree in health administration from the University of Colorado. He was inducted into the Iowa Volunteer Hall of Fame in 2012 in recognition of his community leadership and service on the boards for numerous organizations. Those organizations include Northwestern, where he was a member of the college’s Board of Trustees from 2009 to 2018 and served as its chair for five years. He received Northwestern’s alumni award for Distinguished Professional Achievement in 2007.