Northwestern College to present Shakespeare in the park in October 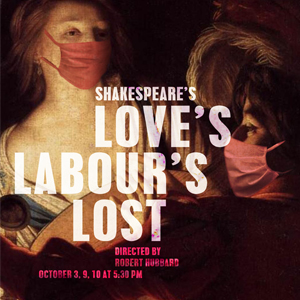 The Northwestern College theatre department will present a romantic comedy by William Shakespeare on the Orange City Windmill Park stage during two weekends in early October.

“Love’s Labour’s Lost” will begin at 5:30 p.m. Saturday, Oct. 3, and Friday and Saturday, Oct. 9 and 10. All three performances are free. The public is encouraged to bring lawn chairs and blankets for seating. The Town Square Coffeehouse will sell walking tacos, coffee, hot apple cider and hot chocolate each evening.

Originally scheduled for last spring, the Northwestern production was shut down halfway through rehearsals due to COVID-19. After many of the original actors graduated in May, Dr. Robert Hubbard, the play’s director and a professor of theatre at NWC, recast the show this fall.

The Bard’s comedy follows the King of Navarre and his three companions as they swear off women for three years to devote themselves to the study of theology, morality and ethics. Their vows are put to the test with the arrival of a princess from France and her three ladies.

Retiring Northwestern College theatre professors Jeff and Karen Barker were originally scheduled to play the king and princess. This fall’s performances, instead, will feature the college’s new theatre professor, Mark Tyler Miller, as King Ferdinand. Miller has a Master of Fine Arts degree in acting and extensive experience as an actor, composer, playwright and fight choreographer.

“What audiences see in the park will be much closer to what performances were like at the Globe Theatre in Elizabethan times,” Hubbard says, referring to the outdoor playhouse where many of Shakespeare’s plays took place.

Hubbard, however, chose the outdoor setting mainly for safety reasons due to the challenges of staging a show during a pandemic. The student actors will wear masks and be miked for sound. “We’ve designed the masks as part of the costumes,” he says. “The costumes are Renaissance-inspired, but there are modern components in the costuming to make them look like contemporary college students.”