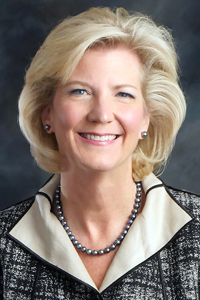 Shirley Hoogstra, president of the Council for Christian Colleges & Universities (CCCU), will speak in Northwestern College’s chapel service on Friday, April 12, at 10:05 a.m. in Christ Chapel. The event is free and open to the public.

Hoogstra, who has been president of the CCCU since 2014, is a graduate of Calvin College who went on to earn a law degree from the University of Connecticut. She spent more than a decade practicing law as a partner at a firm that specialized in litigation in New Haven, Conn., before returning to the world of Christian higher education as Calvin’s vice president for student life in 1999.

As CCCU president, Hoogstra combines her zeal for the rule of law and her passion for Christian higher education, seeking to promote the importance of Christian colleges and universities as a part of a diverse, pluralistic system of higher education.

The Council for Christian Colleges & Universities is a global higher education association of more than 180 Christian institutions, including Northwestern College. The association’s institutions are accredited, comprehensive colleges and universities whose missions are Christ-centered and rooted in the historic Christian faith. The CCCU’s mission is to advance the cause of Christ-centered higher education and to help its institutions transform lives by faithfully relating scholarship and service to biblical truth.