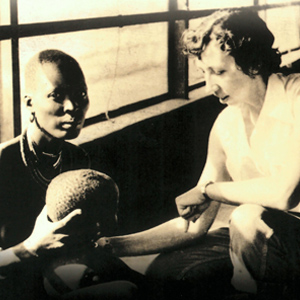 Northwestern College’s Drama Ministries Ensemble (DME) will perform “Sioux Center Sudan,” about an Iowa teacher who became a missionary nurse, on Sunday, March 17, at 7 p.m. in the England Proscenium Theatre. Community members are invited to the free event, which will be followed by a “Sioux Center Sudan” book signing with author Jeff Barker.

“Sioux Center Sudan” is based on Arlene Schuiteman’s journals, in which she recorded, nearly daily, the events, relationships, and spiritual questions and insights she experienced during her three-decade career as a missionary nurse. Schuiteman is now in her 90s and retired in her hometown of Sioux Center.

The play is set in the 1950s and follows Schuiteman on her first assignment to South Sudan. During the hourlong show, the nine-member DME will bring to life the sights, sounds and a sense of the spirit of God at work among the Nuer people. “Arlene’s story is raw, honest and compelling in ways that I believe could inspire a new generation of missionaries,” says Dr. Mark Husbands, a member of the Reformed Church in America’s Commission on Theology and Northwestern’s vice president for academic affairs.

The Northwestern DME has performed across the U.S. and in Ethiopia, Japan and Albania. DME director Barker is also the author of “The Storytelling Church.” He teaches in Northwestern’s theatre department and is on the faculty of the Robert E. Webber Institute for Worship Studies.