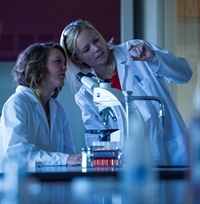 For the second year in a row, Northwestern College has been named to a list of the nation’s 25 colleges with the best professors. The annual CBS MoneyWatch list ranks Northwestern’s professors fifth; they were ranked 11th last year.

The list uses data compiled for Forbes.com by the Center for College Affordability and Productivity. The data is based on the composite teaching scores that schools received at RateMyProfessors.com.

“Liberal arts colleges dominate the list of institutions with the best professors,” wrote Lynn O’Shaughnessy of CBS MoneyWatch. “That isn’t surprising because colleges focus on undergraduate education and routinely offer instruction in small classes that allow students to get to know their professors and find mentors. In contrast, the best-known universities are research institutions where the professors are focused on their own work. At these schools, undergraduate education is not the top priority.”