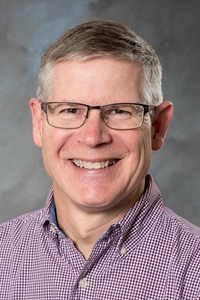 Duane Beeson is Northwestern's primary media contact in his role as director of marketing and communications. He joined the college's staff in 1986 after serving as the coordinator of broadcast relations at Indiana State University and working as a radio reporter and DJ in Indiana. He is a graduate of Taylor University, where he earned a bachelor's degree in mass communications, and he holds an associate's degree in broadcasting from Vincennes University.