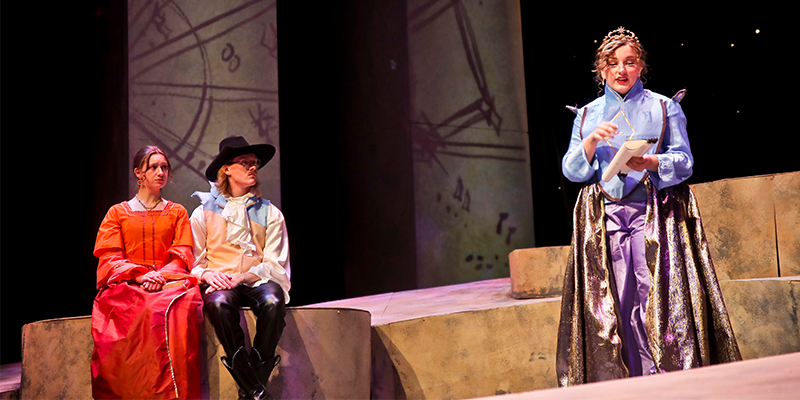 The Northwestern College theatre department’s production of “Life is a Dream” has been selected for presentation at the Region Five Kennedy Center American College Theater Festival (KCACTF) in Des Moines, Iowa, Jan. 22–28.

“Life is a Dream” was penned by 17th century Spanish playwright Pedro Calderón de la Barca. The NWC production, staged in November, featured a cutting-edge setting for the classic play, leading to a tech-heavy show with lots of spectacle. Among other striking visuals, senior theatre major Jett Skrien designed projections that use motion graphics to create a dazzling, neo-futurist version of the Spanish renaissance.

“Being selected to perform at the Kennedy Center American College Theater Festival is a huge honor for our theatre program and a reflection of the excellent work that we do,” says director and NWC theatre department chair Dr. Robert Hubbard. “In the world of college theatre, taking a show to the KCACTF festival is the equivalent of a sports team making the playoffs. It places our work among the best college theatre produced in the Midwest.”

According to Hubbard, this Northwestern production deserves the acclaim it has received. “I think ‘Life is a Dream’ was selected because it is such a strong ensemble effort. In addition to excelling performances, the scene, lighting, projections and costume design all come together for a very impressive collaboration,” he says. “It is a visually stunning show.”

“Life is a Dream” is one of seven productions in Region Five to be selected for the festival this year. The festival is an annual event that includes undergraduate and graduate students from Iowa, Kansas, Minnesota, Missouri, Nebraska, North Dakota and South Dakota.

In addition to staging “Life is a Dream” at the festival, Northwestern theatre students will also participate in workshops and other competitions.


Regarded as one of the best Christian college theatre programs in the country, Northwestern’s theatre department features a collaborative, excellence-oriented environment committed to helping students develop their creative gifts for service in God’s kingdom. Study with Northwestern’s award-winning faculty in the outstanding facilities of DeWitt Theatre Arts Center.