Classic drama "The Crucible" on stage at Northwestern 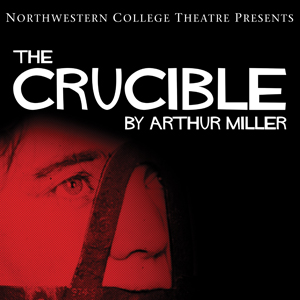 Arthur Miller’s American classic “The Crucible” will soon be on stage at Northwestern College. The colonial-era drama will be presented in the England Theatre Nov. 9 and 15–17 at 7:30 p.m. and Saturday, Nov. 10, at 2 and 7:30 p.m.

“The Crucible” is a fictionalized story of the Salem witch trials that took place in the 1690s in the Massachusetts Bay Colony. A pious, insulated community becomes undone by accusations of witchcraft, which serve to conceal other treachery, including adultery and greed.

“One of the themes our production focuses on is the vital connection between faith and reason,” says director Dr. Robert Hubbard, Northwestern theatre professor. “The characters are Puritans and therefore profess Christianity. The villains are not the so-called witches but the Christians who fail to reason well.”

Miller wrote “The Crucible” in 1953 as an allegory for McCarthyism—named for Senator Joseph McCarthy who accused American citizens of being Communists, ruining reputations and livelihoods. Hubbard chose the play because of its parallels to contemporary society’s preoccupation with conspiracy theories, false accusations and “witch hunts” as well as its exploration of gender relations and abuses of power. Hubbard says, “As is true of many classics, Miller’s play is open to multiple interpretations. It will likely offer rebukes and confirmations for both sides of our divided political spectrum.”

Tickets for “The Crucible” are $8 for adults and $4 for students. Tickets are available starting Oct. 29 for Theatre Patrons and Oct. 30 through Nov. 17 for the general public.