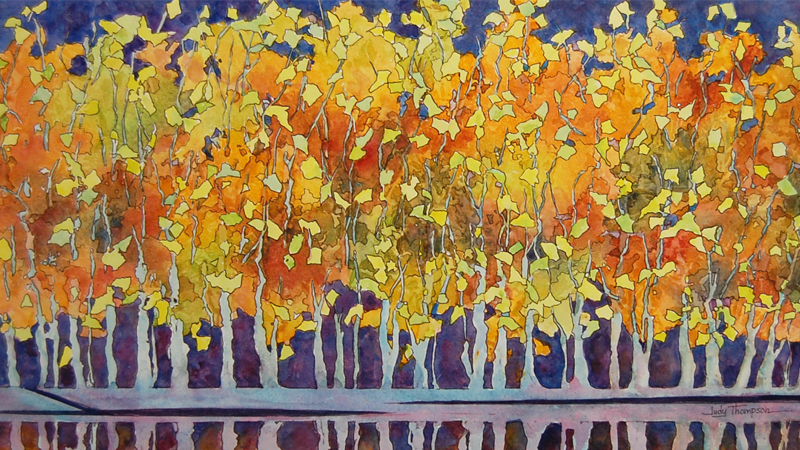 “Aspen Grove,” a watercolor with mixed media on paper, is among the works that will be displayed in Judy Thompson’s art exhibit, “Boundless,” in Northwestern’s Te Paske Art Gallery.

Northwestern College will display watercolor paintings by Orange City artist Judy Thompson in an exhibit scheduled for Jan. 7 through Feb. 29. A public reception with Thompson will begin at 7 p.m. on Wednesday, Jan. 15.

“Boundless” will consist of a collection of watercolors created during time spent on the Great Plains of Iowa, Nebraska and South Dakota. “For decades, I have explored these vast landscapes—their history and their beauty—and have discovered new artistic horizons of my own,” Thompson says. “These wide, open prairies resonate with God’s boundless grace and wisdom and have provided endless inspiration for my paintings.”

Thompson uses vivid colors and expressive line work in her paintings, sometimes beginning with a drawing made with paraffin wax. When painted over with watercolors, the wax resists the paint, creating textured lines that characterize the earthiness of the land. Thompson often draws with a marker or charcoal pencil when she finishes painting, outlining both positive and negative shapes and creating new visual relationships within the composition.

Born in the Midwest, Thompson has lived in Orange City for more than 30 years. Her artwork has received national and regional awards, including first-place honors in the annual juried Iowa Watercolor Society Exhibition. She is also a grant recipient of the Iowa Arts Council through the National Endowment for the Arts. In 2010, she was selected by the National Park Service as an artist-in-residence at the Homestead National Monument in Beatrice, Nebraska, and again in 2013 through 2015 at Badlands National Park in Interior, South Dakota. Her “Homestead Series,” inspired by her first residency, continues to tour throughout the Midwest in celebration of the 150th anniversary of the Homestead Act.

Thompson was commissioned by the South Dakota Historical Society Press to create the cover art for Laura Ingalls Wilder’s autobiography, “Pioneer Girl,” for which she has received international acclaim. She is a rostered artist with the South Dakota Arts Council as both an artist-in-schools/community and a touring artist. And she is represented by galleries in Rapid City, South Dakota, and Lanesboro, Minnesota.