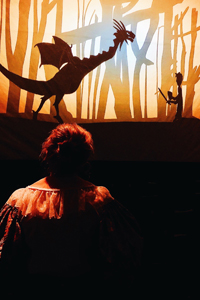 The Northwestern College theatre department’s production of “Jabberwocky” is among those chosen to be performed during the Region Five Kennedy Center American College Theater Festival (KCACTF). Due to COVID-19, the regional festival will be held virtually Jan. 16–24.

Adapted by Northwestern theatre professor Ethan Koerner, “Jabberwocky” is a children’s play based on a well-known “nonsense” poem by author Lewis Carroll. The story is portrayed using different styles of puppetry.

“Jabberwocky” is one of just 12 plays being featured in the Region Five festival, an annual event that features undergraduate and graduate theatre programs from six Midwestern states. With its selection, it is also among the plays being considered for the national Kennedy Center American College Theater Festival in April.

“Not only does this opportunity bring recognition to our theatre department for its commitment to excellence, but it provides our student designers and performers the opportunity to get feedback from industry professionals,” says Koerner. “We are truly honored to be one of 12 invited productions for the KCACTF Region Five Festival.”

Three Northwestern students are also in the running for Region Five KCACTF awards. Rachel Smart, a junior English teaching major from Brookings, South Dakota, is a finalist in the 10-Minute Play category of the playwriting program, for her drama titled “Lethe.”

The Kennedy Center American College Theater Festival is a national theatre program dedicated to the improvement of collegiate theatre in the United States. Focused on the celebration of diverse and exciting theatre, KCACTF involves students from more than 600 colleges and universities throughout the United States.