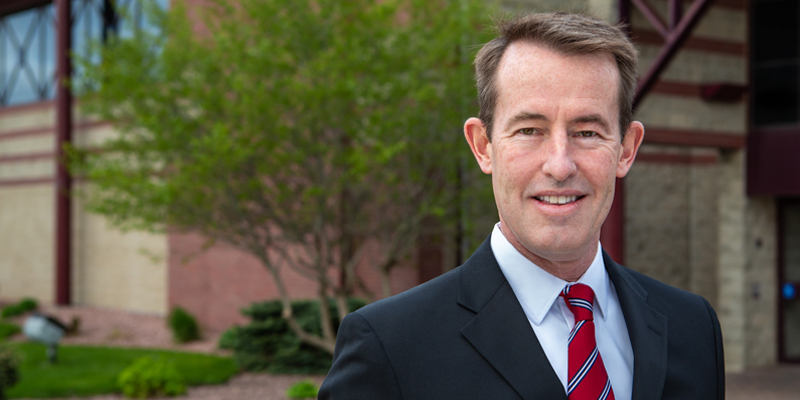 Northwestern College has announced the hiring of Dr. Micah Parker, an intercollegiate athletics leader with more than 27 years of experience, as vice president for athletics. Parker, the director of athletics at NCAA Division I California Baptist University since 2009, will start his new position later this summer.

“Dr. Micah Parker is first and foremost a passionate follower of Christ, devoted husband and father, and exceptional mission fit for Northwestern,” says Greg Christy, Northwestern’s president. “His impressive background includes serving as an assistant coach and head coach at fellow GPAC institution Concordia University as well as in leadership roles at Division I schools Nebraska and Drake. His programs have achieved remarkable success at every level. Micah is a humble and highly accomplished leader who will continue and build upon the culture of excellence that makes Red Raider athletics stand out.”

As athletic director at California Baptist, Parker leads a department with a $25 million budget, 90 full-time staff, 21 sports and 450 student-athletes. He oversaw the institution’s transitions from the NAIA to NCAA Division II and now NCAA Division I—and an invitation to the Western Athletic Conference. He created a corporate sponsorship program and athletic development board, increasing annual revenue of donations, ticket and corporate sales from less than $180,000 to more than $1.5 million annually. Under his leadership, California Baptist opened an $80 million, 5,050-seat events center in 2017, won the NCAA Division II Learfield Cup in 2018 and won the PacWest Commissioner’s Cup five years in a row.

As much success as the Lancers have had athletically, they have also achieved academically. California Baptist’s student-athletes have boasted more than a 3.0 GPA over the last 16 semesters, including a best 3.445 department GPA in 2019–20.

“Northwestern has a great tradition of achieving athletic excellence while maintaining its Christian mission,” says Parker. “I’m excited to help build upon that. I competed in the GPAC as a cross country and track athlete in the late 1980s, and I coached against Northwestern in men’s and women’s basketball. I’ve always had a great respect for the Christian mission of the college and the accomplishments they’ve enjoyed both in the GPAC and nationally. This is an opportunity to use the experience I’ve been blessed with to help our teams win in life beyond the successes in athletics.”

Parker says he is eager to get to know the people at Northwestern: coaches, staff, donors, alumni and students. “My goals will be to build upon Northwestern’s great tradition. I want the Red Raiders to be in situations where they can have the experience of winning a conference or national championship and to help them compete in the classroom as hard as they do in their sport. Finally, it would be my goal that participating on a team would help our student-athletes grow in their relationship with Christ.”

A sought-after Christian motivational speaker, Parker has given more than 650 presentations to national youth gatherings, faith-based businesses, school assemblies, church events and Fellowship of Christian Athlete groups. He received Concordia University’s first Alumni Servant Leadership Award in 2017, and he was named the Press Enterprise’s Most Influential Sports Figure in the Inland Empire in 2015.

Parker replaces Dr. Earl Woudstra, who retired in November after 36 years of service to Northwestern, the last five of which were as athletic director. He is now the city administrator for Orange City.


Become a Red Raider and our winning coaches will help you become a standout athlete. But the challenge won't end there. Your training and performance expectations in the classroom will be equally rigorous. And your Christian coaches and teammates will challenge you in your faith, making you stronger for life.