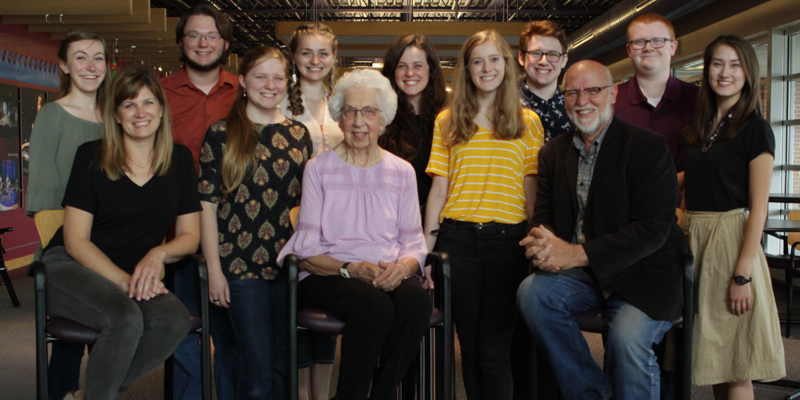 Northwestern College’s Drama Ministries Ensemble will tour “Iowa Ethiopia,” a play about retired missionary nurse Arlene Schuiteman (front, center), in Ethiopia Dec. 12–23. The nine-member cast will be accompanied on the tour by Northwestern theatre professor Jeff Barker, the play’s author and director, and Juliana Else, a member of Schuiteman’s home church, First Reformed in Sioux Center.

Northwestern College’s Drama Ministries Ensemble (DME) theatre company will tour a production of “Iowa Ethiopia” in Addis Ababa, Ethiopia, Dec. 12–23. The nine-member cast will perform at the Mekane Yesus Seminary as well as at several churches and schools.

The play is drawn from the journals of Arlene Schuiteman, a former missionary nurse who is currently in her 90s and living in Sioux Center. “Iowa Ethiopia” tells the story of Schuiteman’s ministry between 1966 and 1977 as she helped open a “dresser school” in the city of Mettu, teaching wound care and other medical skills to Ethiopian health care workers.

During those years, Schuiteman witnessed a spiritual revival that swept through Ethiopia—a revival that touched her personally and resulted in surprising gifts of the Holy Spirit in her own life.

In addition to sharing Schuiteman’s story, “Iowa Ethiopia” also tells the story of Judaism and Christianity in Ethiopia, from the Queen of Sheba—who visited Solomon and is rumored to have borne his son—to the Ark of the Covenant, which many, including Schuiteman, believe was brought to Ethiopia and remains there today, guarded by an elite group of priests.

“Iowa Ethiopia” was scripted by Northwestern theatre professor Jeff Barker and is a sequel to “Sioux Center Sudan,” a play about Schuiteman’s first overseas assignment. Barker also has written two books about Schuiteman’s life, both titled the same as the plays.

This will be the DME’s second tour in Ethiopia; the company also toured “Iowa Ethiopia” in Addis Ababa in 2011.