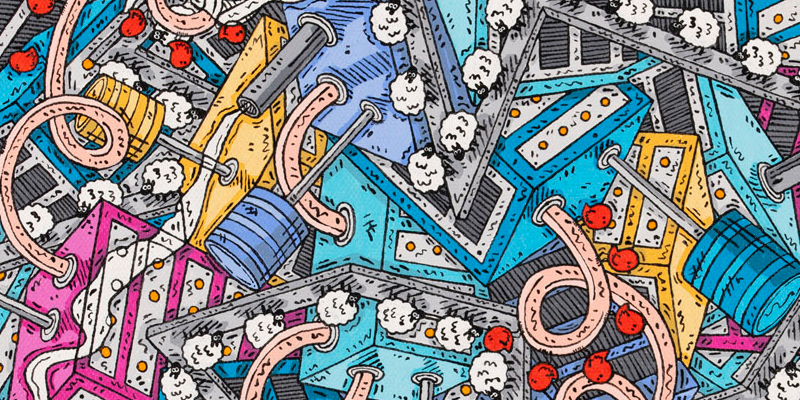 Among the works to be exhibited by Mark Kochen in Northwestern College’s Te Paske Gallery is “When Stares Kaleid,” an acrylic on canvas he painted this year.

Works by Sioux City painter and muralist Mark Kochen, titled “Unspecified Mechanical Properties,” will be exhibited in Northwestern College’s Te Paske Gallery Sept. 30 through Nov. 1. A public reception with the artist is scheduled for Friday, Oct. 18, at 7 p.m.

Kochen earned a Bachelor of Fine Arts degree from the Iowa State University College of Design in drawing and painting. He primarily creates large-scale, complex, illustrative paintings. Much of his work is part of an ever-evolving story, featuring a vast array of imagined characters and landscapes inspired by ’80s pop culture, artifacts from his childhood, and a fascination with data-dense imagery.

“Armed with a small aluminum ruler, a mechanical pencil and a tiny paint brush, I have created a universe where I exist as an enormous, fuzzy, blue monster—where visions inspired by childhood imagination are made real through years of effort and refinement,” says Kochen in describing his artwork. “Each of my paintings serves to expand the edges of this universe where I explore the endless possibilities, environments, creatures and their exploits, and extend an invitation to the imagination to decipher a nebulous collection of narratives woven into complex compositional structures.”

Kochen, who has taught beginning and advanced painting at the Sioux City Art Center since 2004, has displayed his works in solo exhibitions in Sioux City, Ames, Le Mars, Okoboji and Omaha. His murals can be seen in Sioux City and New York City.