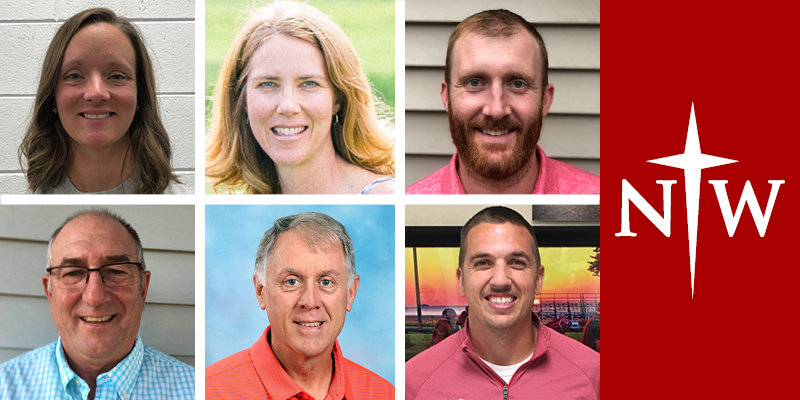 Three Northwestern College graduates will be inducted into the school’s Athletic Hall of Fame on Saturday, Sept. 28. The honorees, along with the 2019–20 Red Raider Club Coaches of the Year and Barnabas Award recipient, will be recognized at a luncheon at 11 a.m. in the Vermeer South Dining Room and at halftime of the football game against Jamestown, which starts at 1:30 p.m.

Kami (Kuhlmann) Busch of Lawton, Iowa; Ann (Sybesma) Korver of Orange City; and Kale Wiertzema of Hills, Minn., will bring the number of Hall of Famers to 119. Bruce Held of Hinton, Iowa, and Jeff Meyn of Boyden, Iowa, will receive Red Raider Club Coach of the Year honors. The Barnabas Award—which recognizes Raiders who encouraged others to strive for their best performance athletically, academically and personally, and who used their sport as a way to bring others to a knowledge of Jesus Christ—will be bestowed upon Jerome Hoegh of Hawarden, Iowa.

Busch graduated from Northwestern in 2013 and earned NAIA second team All-American honors in basketball in 2012. She was a member of three Red Raider national championship teams—in 2010, 2011 and 2012—and was the national tournament MVP as a senior. She also earned NAIA Player of the Week honors that season. She received all-Great Plains Athletic Conference recognition four years, averaging 14.4 points in her career, and was a two-time NAIA Scholar-Athlete. Busch is fifth in Northwestern’s record book for career steals with 221, eighth in scoring with 2,028, and 12th in assists with 383.

Busch also earned all-conference honors three years in softball, recorded a career batting average of .355, and was named an NAIA Scholar-Athlete in that sport as a junior and senior. She earned a Master of Education degree in teacher leadership from Northwestern in 2017 and teaches Spanish at Lawton-Bronson High School. Busch graduated from Charter Oak-Ute High School in 2008.

Wiertzema, a 2009 Northwestern graduate, earned NAIA first team All-American and NABC/State Farm All-American recognition in basketball as a senior. He was also the GPAC Player of the Year that season, averaging 19.3 points. Wiertzema competed on Red Raider teams that made it to the NAIA Div. II Final Four in 2007 and 2008, and he earned all-tournament honors in 2007. He ranks fourth in career steals for Northwestern with 155, seventh in made free throws with 407, and seventh in assists with 376. He’s the Raiders ninth leading scorer with 1,576 points. He hit all 14 of his free throws in a 2009 game.

Held, who graduated from Northwestern in 1979, recently retired as co-head football coach at Hinton High School, a role he held since 1983. Under his leadership the Blackhawk football team compiled a 204-137 record. Last season’s squad went 8-2 and qualified for the playoffs. Held served a total of 40 years at Hinton, where he also taught and coached golf and boys basketball. He graduated from Hinton in 1975.

Meyn, a 1978 Northwestern alumnus, has been an assistant boys basketball coach at Boyden-Hull High School for 41 years. He also serves as a teacher and athletic director. His teams have compiled a record of 368-199; last season’s junior varsity squad went 17-0. The Comets varsity finished as Class 2A state runner-up in 2019. Meyn graduated from Boyden-Hull in 1974.

Hoegh graduated from Northwestern in 2010 and was a four-year member of the basketball team. He is a middle school science teacher at West Sioux, where he also serves as head boys basketball, head track and assistant football coach. He graduated from Atlantic High School in 2006.

The public is invited to attend the luncheon. Tickets are $10 apiece. For more information, contact Kara Smit in Northwestern’s athletic department, 712-707-7280 or kara.smit@nwciowa.edu.