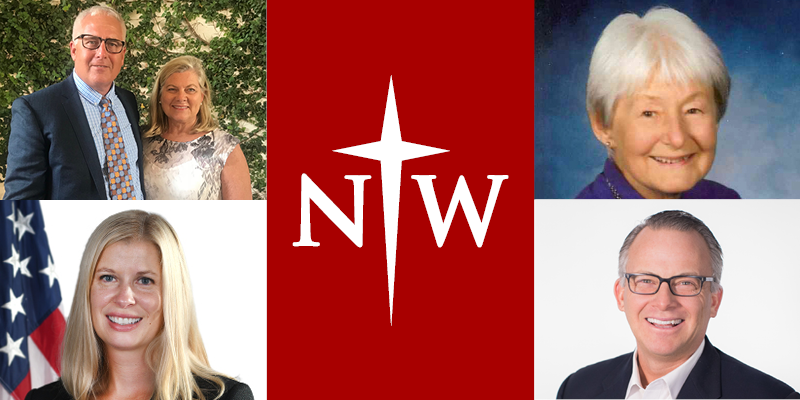 Northwestern College will present five of its alumni with awards recognizing their accomplishments and service during the college’s Raider Nation Celebration Homecoming and Parents Weekend. The recipients will be honored during a banquet Saturday evening, Sept. 28.

The Bomgaars, 1977 alumni of Northwestern, have given generously of their time and resources to their alma mater. A veterinarian and CEO of RC Family Farms, Dave chaired the fundraising campaign for the Juffer Athletic Fieldhouse and served on the fundraising committee for the DeWitt Family Science Center. He also is a member of the business department’s Board of Advisers. Anita, a community volunteer and former real estate broker, serves on Northwestern’s Board of Trustees, acting as the board’s secretary and chairing its Enrollment and Marketing Committee. She previously served as president of the National Alumni Board and on the building committee for the DeWitt Learning Commons.

Endert, a 1960 alumna of Northwestern Junior College, is retired from a social work career in which she advocated for the welfare of children. She served as the director of social services for two hospitals in Birmingham, including the Children’s Hospital and Clinics, and taught social work at University of Alabama campuses in Birmingham and Tuscaloosa. She also served on organizations dedicated to preventing child abuse and building stronger families. Endert earned a bachelor’s degree at Hope College and a master’s in social work at Florida State University.

Jackson, who graduated from Northwestern in 2002, is a board-certified emergency medicine physician who serves on the White House medical team. She is one of eight military doctors charged with providing worldwide emergency response and comprehensive medical care to the president, vice president and their families. They also provide emergency coverage for White House guests. A lieutenant colonel in the U.S. Air Force, she was deployed as a member of a tactical critical care evacuation team to Afghanistan and then assigned to an Air Force special operations unit and deployed to Iraq. She is a graduate of the Kansas City University of Medicine and Biosciences.

Vander Stoep, a 1990 Northwestern alumnus, was an FBI special agent for 21 years. As a member of the Joint Terrorism Task Force, he spent seven months in a safe house interrogating a terrorist suspected of cooperating with Osama bin Laden. That suspect became the first successfully prosecuted terrorist in the U.S. after 9/11. Vander Stoep is now vice president of global security for NetJets, the leader of worldwide private aviation that specializes in selling part ownership or shares of business jets. Before joining the FBI, Vander Stoep served nearly six years as a fundraiser in Northwestern’s advancement office.