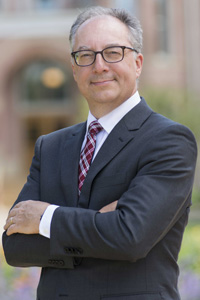 Trinity Western is Canada’s largest Christian university, with 4,000 students enrolled in 43 undergraduate programs and 17 graduate programs. Like Northwestern, TWU is a member of the Council for Christian Colleges & Universities.

“Dr. Mark Husbands is a distinguished academic, a respected theologian and an experienced administrator, and he and his wonderful wife are both proud Canadians,” said Lorne Jacobson, chair of Trinity Western’s Board of Governors, in an announcement on the university’s website. “Mark has the credentials and experience to provide distinguished leadership, but more importantly, he has the heart and passion to provide servant leadership to our university and to advance the evangelical mission of TWU.”

Since 2016 Husbands has been Northwestern’s chief academic officer, working to raise the profile of the student learning experience and allocate the resources necessary to support academic excellence. He has also overseen such areas as the library, graduate and adult studies, global education, computing services, academic support and the registrar’s office.

“Since Mark’s arrival, I have had the pleasure of watching my leadership team come together and be more effective with the addition of his skills and talents,” said Northwestern’s president, Greg Christy. “He has been a joy to work with personally and professionally. He is a devout follower of Christ, highly intelligent and a gifted administrator who will provide strong leadership for Trinity Western. Our loss is truly Trinity’s gain.”

Under Husbands’ leadership, four academic divisions were established and four deans hired internally. “He has worked closely with the deans to establish a solid structure of academic leadership in order to push forward with other academic endeavors,” said Christy. “Mark has also championed faculty and student scholarship. In his first year here, he established the Celebration of Research to showcase undergraduate and graduate student and faculty scholarship. In addition, he created the Faculty Faith and Learning Seminar program and the Faculty Excellence in Faith and Learning Award. He also led our efforts to develop an updated strategic plan with an academic focus pushing us into 2023 and beyond.”

He taught theology for six years at Wheaton College in Illinois, where he also oversaw undergraduate research in developing nations, led an annual theology conference and helped to design a pre-orientation experiential education program. He also taught theology and directed Tyndale University College and Seminary’s extension education and summer school for two years.

Husbands earned doctoral and master’s degrees in theology from the University of Toronto and completed his undergraduate education at Toronto’s York University. He has edited seven books and published numerous articles and chapters. A sought-after guest lecturer, he has served on the Reformed Church in America’s Commission on Theology and the board of 3Sixty, a Christian community development organization.