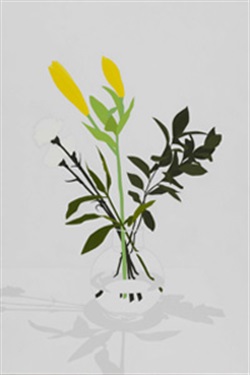 “Flowers 2” is one of the paintings by Sioux City artist Benjamin Pratt that will be exhibited in Northwestern College’s Te Paske Gallery Sept. 24 through Oct. 26.

Northwestern College will display the minimalist paintings of Sioux City artist Benjamin Pratt in its Te Paske Gallery Sept. 24 through Oct. 26. A public reception is scheduled for Thursday, Oct. 11, at 6:30 p.m.

“Ben Pratt’s Flowers” features acrylic paintings notable for their clean, clearly defined shapes. An industrial draftsman by trade, Pratt uses AutoCAD to sketch original artwork and finalize his compositions before transferring them by hand onto the canvas. Rather than create a realistic image of an object, he redesigns and simplifies it, which makes his precise paintings appear similar to the work of pop artists such as Andy Warhol.

“Because I limit object information and a color palette in normal practice, I wanted to focus on adding data to my imagery and exploring color relationships—while still abiding by the rules I have developed for myself,” he says.

Pratt earned an industrial drafting degree from Western Iowa Tech Community College and a bachelor’s degree in art from Briar Cliff University. His work has appeared in multiple publications and has gallery representation. He was also a featured artist on the website for Autodesk, the creators of AutoCAD, and had a solo show at the Sioux City Art Center in 2017.