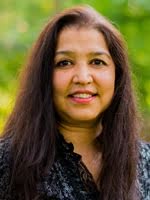 Dr. Poornima D’Souza is a School-Home Liaison and a Parent Educator with the Sioux Falls School District. As a liaison, she tries to bridge the communication and cultural gap between the refugee and immigrant parents and the school system. As a parent educator, she empowers immigrant parents with computer skills, builds their proficiency in the English language, and teaches American social skills in order to help parents learn ways to support their children's education.

Dr. Dsouza is presently employed with the Sioux Falls School District. She has been with the district since 2004. Originally from India, she received her Masters in Banking and worked in the Public-Sector bank for 15 years before moving to the United States. Dr. D’Souza completed her doctorate from the University of St. Thomas, MN with Doctor of Education in the field of Educational Leadership. She switched careers to education and completed her English as New Language endorsement at SDSU. She teaches Differentiation and Diversity, graduate level course as an adjunct professor at Augustana University. She also teaches Instructional Strategies for Diverse Students and Settings at Northwestern College. Her hobbies include gardening, cooking, and graphic designing.

2017 - May, Presenter at U.S. Military Entrance Processing Station on cultural nuances and norms in the Asian Culture

2015 – June, Guest Speaker for MCHC/RISE-UP program at Sioux Falls - Intersection of Education and Health in the Immigrant Population

2007– October Speaker at the OELA Summit VI at Washington D.C

2017– May, Winner of book grant from REACH a Reader

2017– May, Publication: “Foot Prints”- collection of stories both fiction and non-fiction about the first-hand experiences of adult learners from different cultures.

2017– April, Winner of Innovation in Education grant for Literacy for the Parent University's World of Wisdom Book Club

2015 – August, Winner of the Hometown Hero Award from Modern Woodmen of America

2013 – October, Winner of the Community Foundation Grant for i-Pads

2012 – December, Winner of the PEP Grant and Community Foundation Grant for i-Pads

2010 – May, Winner of the Qwest Teachers and Technology Grant from South Dakota DOE

Recipient of many awards for developing web pages