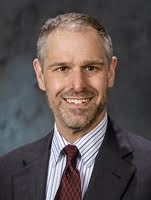 Dr. Young is a political theorist with research interests in modern political thought, the political theory of international relations, and the intersection of theology and political theory. He has presented papers at several academic conferences in the United States and has authored articles, book chapters, and book reviews. His current research is on the relationship of political liberalism and natural law.

This course examines major political issues in Europe since 1945. Topics covered include the emergence of a politically divided Europe, ideological debates in post-war European politics, the project of European integration, the breakup of the communist bloc and its aftermath, religion and European politics, and current issues in Europe. Prerequisite: completed bachelor's degree in education. (3 credits)

(4 credits)(IGE option under Self and Society) A broad survey of the major political and governmental institutions in the United States, this course examines how citizens attempt to influence their government and how the government responds. The course also develops the foundations for a biblical perspective on the role of government and the task of citizens.

A survey of contemporary political ideologies such as liberalism, conservatism, socialism, and others, with a special focus on liberalism as the dominant political and economic ideology of our time. Students will seek to understand the relevance of these ideologies for public policy, and will seek to develop a Christian perspective on, and critique of, contemporary ideologies. (4 credits)(IGE option under Self and Society)

This course investigates war and terrorism in a globalized world. We will examine possible causes of international conflict and the obstacles to peaceful solutions, as well as studying the various aspects of globalization (political, economic, social, etc.) as the context in which these issues take place. (4 credits, alternate years, consult department)

A survey of the politics of several countries from different continents. Special attention is paid to historical development and ideological, religious, and cultural factors affecting a country's politics. (4 credits) (NWCore option under Cross-Cultural Engagement)

A survey of international history from 1945 to 2000, with a focus on the Cold War and its global impact. The major aim of this course is for students to understand the time we live in now by exploring recent international history. A major theme is the interaction between power politics and ideology. We will also note the various possible historical narratives that can be told about the same time period. (4 credits) (Fulfills NWCore Historical Perspectives requirement)

“The Maoist Moment in American Conservatism.” Perpectives: A Journal of Reformed Thought. September/October 2016.

"MacIntyre, Alasdair C." in The Encyclopedia of Political Thought (Wiley-Blackwell, 2014)

"Martin Wight: Politics in the Era of Leviathan" in The Christian Realists: Reassessing the Contributions of Niebuhr and his Contemporaries, edited by Eric Patterson (University Press of America, 2003).