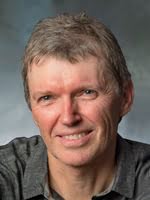 A member of Northwestern's faculty since 2000, Dr. Holm teaches a wide variety of choral, vocal and music history courses in addition to directing choral ensembles. He also conducts the Sioux County Oratorio Chorus.

Holm was on sabbatical in Taiwan in 2016–17, teaching courses at a university as well as directing various choral and instrumental ensembles and offering workshops and master classes in choral methods and conducting techniques. He has returned to Taiwan nearly every year since then and has prepared 15 Taiwanese choral works for performance by American choirs and conductors. He is on sabbatical there during the spring 2023 semester continuing that work as well as teaching and conducting.

Prior to coming to Northwestern College, he served as director of choirs at The King’s University College in Edmonton, Alberta, and as chair of the fine arts department and music professor at Prairie Bible College in Three Hills, Alberta, Canada. Dr. Holm is the recipient of two Canada Council choral conducting grants, as well as the two-year Sir Frederick Haultain Fellowship awarded by the Province of Alberta for outstanding academic scholarship in the arts.

Membership in each ensemble is by auditions held in the fall during the first week of classes.(1/4 credit)

Membership in each ensemble is by auditions held in the fall during the first week of classes. Note: Ensembles may be repeated. Chamber Ensembles may be taken in lieu of private instruction for one semester in either the junior or senior year to meet scholarship requirements.

This class is designed for the beginning singer and addresses the processes and mechanics of singing such as posture, breathing, tone production and diction. A rudimentary knowledge of note reading is expected.(1 credit)

This course is designed to acquaint the student with the singer's pronunciation of English, French, German, Italian and Latin, using the standard International Phonetic Alphabet.Prerequisite: applied voice or permission of instructor.(2 credits, alternate years, consult department)

This course is designed to assist students in developing a basic conducting technique. Skills are taught which enable the student to direct vocal and instrumental groups. Included in the course are studies in transposition, clef reading and score preparation.Prerequisite: MUS112.(2 credits, alternate years, consult department)

This course is designed to further develop the student's basic conducting skills. The student will learn how to interpret stylistically the intentions of a composer and how to rehearse effectively. Compositions for band, choir and orchestra are studied. Included in the course are studies in score preparation, clef reading, transposition, rehearsal techniques, and error detection.Prerequisite: MUS301.(3 credits, alternate years, consult department)

"Choosing Literature for a Powerful Performance," published in the spring 2004 edition of Melisma, the official publication of the North Central American Choral Directors Association.