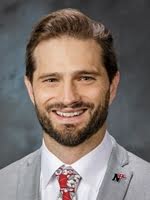 Ochsner was a strength and conditioning assistant at the University of Minnesota, where he managed and implemented programs for men’s and women’s hockey and golf, men’s track and field, swimming and diving, basketball, and baseball. He also was the head strength and conditioning coordinator for Woodbury High School in Minnesota and an athletic performance coach for the Catalyst Institute in Hudson, Wisconsin. At both locations he was responsible for the performance enhancement of a variety of athletic teams and individuals year round.

Ochsner was wrestler, sprinter, and running back and captain of the Red Raider football team while a student at NWC. After graduating with a major in athletic training and a career concentration in fitness management, he earned a master's degree from Texas Tech University in exercise and sports science.