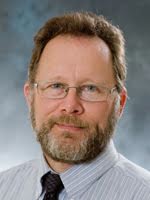 Professor Koene is a certified translator and interpreter who has earned two master's degrees: one in interpretation and translation, and the other in Latin American history. He was Iowa’s Professor of the Year for 2004, chosen for that honor by the Carnegie Foundation and the Council for Advancement and Support of Education.

The main goal of this course is to improve oral communication, which includes speaking as well as listening, comprehension. Since successful communication also involves cultural awareness of the Spanish speaker's feelings, thoughts and attitudes, part of this course involves studying sources of these important underlying constructs.Prerequisite: SPA202 or equivalent proficiency.(1 credit)

SPA327 - Hispanics in the United States

A wide-ranging study of the current situation of Hispanics in the United States. After an historical overview, a thematic approach will be taken to better understand the role of Hispanics in the United States and their growing influence. Possible topics include demographics, voting tendencies, purchasing power, Hispanic media, religion, labor laws, immigration, Spanglish and bilingualism, among others. Using interviews and research, the course will conclude with a study of our Hispanic neighbors here in northwest Iowa.Prerequisites: SPA202 and one 3-credit 300-level course.(3 credits, alternate years, consult department)

SPA331 - Introduction to Translation and Interpreting

An advanced level course taken after completion of Interpreting II, students will consolidate their skills in sight-translation and short and long consecutive interpreting while primarily focusing on simultaneous interpreting. Students will deepen and reinforce their simultaneous interpreting abilities with the addition of new strategies, skills building exercises and practice techniques. Course material will include a broad range of materials from the legal, medical, religious, scientific, political and other fields and will increasingly be from real-world situations. Continued discussion of moral, ethical and Christian considerations for interpreters. Students will interpret both from their B language into their A language as well as A to B. Prerequisites: SPA 331, 332 & 333. (3 credits; alternate years, consult department)

This course is an introduction to the theory, methods, techniques and problems involved in basic translation. The first half of the semester will focus mostly on translating from Spanish to English. The second half of the course will involve general material from specific areas of life: popular culture, music, social sciences, education, business, medicine, the legal profession, etc., with translation exercises from both Spanish to English and English to Spanish. Prerequisites: SPA331. (3 credits, alternate years, consult department)

An intermediate level course taken after completion of Translation I, students will continue to strengthen their skills in translation by becoming more adept at applying the theory, methods and techniques first introduced in earlier courses. Course material will come from a broad array of legal, medical, religious, scientific and political sources, as well as materials stemming from community needs. Although primarily from Language B to A, students will also increasingly translate from their A language into their B language more and more. Prerequisites: SPA 331 & 336. (3 credits; alternate years, consult department)

An advanced level course taken after completion of Translation II, students will consolidate their skills in translation. Students will learn how to improve earlier translations (either from their own translation or from others) as they target their translations for specific audiences. Course material will come from a broad array of legal, medical, religious, scientific and political sources, as well as materials stemming from community needs. Course material will be longer in nature and more challenging than that of Translation II. Students will translate both from their Language B into their Language A as well as A to B. Prerequisites: SPA331, 336 & 337. (3 credits, alternate years, consult department)

Designed for advanced Spanish students, this practicum gives students the opportunity to practice their Spanish on a daily basis in a Spanish speaking environment. Emphasis is placed on the development of oral communication, both speaking and listening. Placement opportunities include, but are not limited to, living in the Northwestern College Spanish house or with a Spanish speaking Hispanic family.Prerequisite: SPA202. Enrollment through permission of modern foreign languages department.(2 credits)

A study of topics in Spanish language and culture not fully covered in other Spanish courses in response to student or faculty interests. Note: May be taken more than once, provided a different topic is studied. (2-4 credits)

(2 credits may apply toward the major or minor)

“The State of Undergraduate and Graduate Programs in T&I”, paper presented at Iowa Interpreters and Translators Association (IITA), June 11, 2011

"Professional Court Interpretation & the Christian Professor," paper presented at NACFLA, March 2007, and published in the Journal of Christianity and Foreign Languages, Vol. 9, spring 2008

"Integrating the Bible Into the Language Classroom: A Practical Approach to Key Biblical Passages and Their Relevance to Language," paper presented at NACFLA, April 2003

Nebraska Association of Translators and Interpreters

U.S. Professor of the Year (Iowa), Carnegie Foundation for the Advancement of Teaching and Council for Advancement and Support of Education, 2004