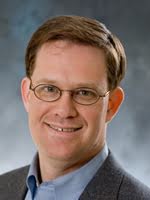 Through medieval and renaissance literature, linguistics and German, Dr. Kensak seeks to impart a love for words—their meaning, power, and history. He earned degrees in comparative literature and music performance from Princeton and his Ph.D. in English from Vanderbilt. Kensak's research on Chaucer’s Canterbury Tales involves medieval pilgrimage narratives, language theory, alchemical lore, and the metaphor of spiritual inebriation. His work has appeared in journals like The Chaucer Review, Studies in Philology, and Philological Quarterly. With funding from the Lilly Foundation, Kensak produced a multimedia German textbook for use in Northwestern's four-course German sequence. With funding from the Mellon Foundation, he is adapting his signature history of the English language course to be offered through the CIC Online Humanities Consortium. In addition to German, Kensak is proficient in Latin, Middle English, and Old English, and has a reading knowledge of several more modern and ancient languages. Dr. Kensak has served as Honors Program director, co-director of assessment, and director of integrative general education.

ENG250LC offers students an introduction to literary study. The topics of individual sections vary by instructor and semester. After completing this writing-intensive course, students will be able to imagine other lives, times, and places by reading a variety of texts; empathize with characters who have diverse stories and perspectives; analyze different genres of literature using the tools of literary study; craft a coherent essay with a clear thesis and careful textual analysis; articulate ways that literature speaks to and informs their own lives; express delight in God through the beauty of language and literary text; and witness God's presence in the world through literature. (4 credits) (Fulfills NWCore Literary Contexts requirement) Topics include: American Literature and the Rhetoric of Freedom: Americans often regard freedom as the defining characteristic of both their nation and themselves. This course examines how the rhetoric of freedom has been a force in American literature. We will complicate our understanding of American freedom by examining how it has been continually redefined throughout the nation's literary history. We will consider how minority and oppressed groups have used the rhetoric of freedom to advance their own liberation and how Christian religions concepts and language have contributed to this rhetoric. Students will practice reading and writing critically and become familiar with a variety of literary genres, including historical narrative, autobiography, poetry, drama, essays, short stories, and novels. Literature in the World: This course teaches students to appreciate the aesthetic value of literature and consider its cultural contexts. The course explores the beauty of language, the importance of understanding the self and others, and invites readers to consider how literature contributes to our contemporary culture. The course is arranged thematically and content varies from year to year. Themes may include, but are not limited to: immigration, war, poverty, the power of metaphor, and visual art and literature. Literary Imaginations: For literature to be more than ink stains on white paper, we must use our imaginations to give it life. In this course we shall read works from throughout human history and around the world (India, Greece, Italy, England, Russia, Nigeria, Ireland, Japan) to imagine and understand the world that people have believed in, created, and inhabited. The Lives of Others: This course explores 4000 years of stories, from ancient Mesopotamia to the American South. Plays, poems, epics, and autobiographies broaden our perspective on the world and deepen our understanding of being human. Two central themes of the course are perceptions of difference and expressions of faith. Reading, Spirituality and Cultural Politics: As careful, critical readers, we will come face to face with all sorts of strangers, gods and monsters (both mythic and modern) as we journey through New Mexico deserts, English monasteries, modern day American prisons, contemporary Nigerian villages, Aboriginal healing ceremonies, and deep into the heart of Japan's 17th century Samurai culture.

William Shakespeare never attended college, yet he saw the world sharply in his mind's eye. He wrote piercingly about kings and college students, warriors and witches, goblins and gravediggers, his 1,000 characters have never been off the stage in 400 years. In this course we read eight plays which fathom the range of human experience and take the English language to the height of expressive beauty. Prerequisite: ENG250LC (4 credits, alternate years)

In this course, we learn the rudiments of language study, trace the history of English, and gain a rigorous appreciation for the power of words. We follow the English language from its origin in a warlike Germanic tribe to its present state as the dominant medium of international communication. We learn the historical reasons for our irregular spelling and enormous lexicon. We sample varieties of English across America and throughout the world. Along the way, we learn to read basic Old and Middle English, challenge common assumptions about the nature of language, and confront the devastation of the world's linguistic ecology. (4 credits; alternate years, consult department)

Along with instruction in the German language, beginning German offers students enhanced cognitive skills and insight into another culture. Classes foster communicative competence by emphasizing speaking, listening, reading and writing. Students begin to acquire the linguistic and cultural fluency necessary for basic communication in a German speaking country.Prerequisite: No previous study of German, or placement by the foreign language placement exam.(3 credits)

Instruction in the German language and enhanced cognitive skills and insight into another culture. Classes foster communicative competence by emphasizing speaking, listening, reading and writing. Building on previously acquired ability in German, students acquire the linguistic and cultural fluency necessary for basic communication in a German speaking country.Prerequisite: GER101, or placement by the foreign language placement exam.(3 credits)

“What Transpires in Marvell’s ‘To His Coy Mistress’: A Pattern of Subversive Allusions.”  Northern Plains Conference on Early British Literature, Dordt College April 2013.

"My first matere I wil yow telle": Losing (and Finding) Your Place in Chaucer’s Book of the Duchess. In "Seyd in forme and reverence": Chaucerian Essays in Memory of Emerson Brown, eds. Tom Burton and John F. Plummer. Provo: Chaucer Studio: 2006.

Peer-reviewer for The Chaucer Review

Peer-reviewer for The University of Toronto Press